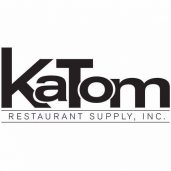 ↳ Many negative reviews?
is not affiliated, associated, authorized, endorsed by, or in any way officially connected with KaTom Restaurant Supply, or any of its subsidiaries or its affiliates. The use in this website and/or in related promotional print or video material of trademarked names and images is strictly for editorial and descriptive purposes.

Preface: I’m a homeowner who’s tired of buying cheap plumbing supplies from Home Depot and Lowe’s. Also, I don’t like supporting Amazon and will buy from the little guy even if it’s more expensive. I can’t recommend doing that with Katom. It cost me $141.69 to return a faucet, that’s their restocking fee plus the required shipping… Read more➤

I was surprised to encounter so many negative reviews on this restaurant as my expectations have been overly-met. I ordered a take-away smoked turkey for Thanksgiving and was happy to learn they offer a variety of sides for free. Before, we used to have dinner with my husband there, and always went for BBQ sets which were… Read more➤

Ever since DHL handed over shipments from Germany to the company, things have only gotten worse. When sending before, the shipments were thoroughly delayed, the courier rings 10 o'clock in the morning on a working day while I am at work, saying that he is already at the door of my house - we talked that he will deliver the next day. I ended up receiving the shipment a week later because "the department couldn't find it". Today I received a package that was torn open. At first it seemed that the transport was damaged, but the packets inside were also returned.