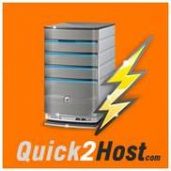 Had the same thing happen to me. Make sure you file complaints with ITC, IC3, FL Atty...

↳ Return or change a ticket? never!
is not affiliated, associated, authorized, endorsed by, or in any way officially connected with Quick2host, or any of its subsidiaries or its affiliates. The use in this website and/or in related promotional print or video material of trademarked names and images is strictly for editorial and descriptive purposes.

Quick2host → It is OK, but with a few reservations

This hosting is not bad. But I had some awkward moments with their tech support recently. Four days in a row, two of my servers were turned off. I saw that they did it. I wrote to their support team, but they denied that it was their fault. No explanations or apologies. That was strange and impolite…. Read more➤

Hosting and Web Design
Share Report
Most Reviewed:
Thank you for your generosity and understanding
→ Endeavor Air

Waiting for 263 vans hoping it will arrive after the time list on the internet and at the stop. The router arrived with a delay of 25 minutes, plus another 10 minutes which I was waiting for in advance. When he entered the question of whether they were driving after the list or it was just to be, he began to speak indecently and say that he would like to leave the car, filling in the order at least. They don't even have anyone to work with. We did not receive any response from the company.