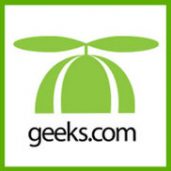 ↳ Re: monthly internet & call packages (thread:2149964)
is not affiliated, associated, authorized, endorsed by, or in any way officially connected with Geeks.com Store, or any of its subsidiaries or its affiliates. The use in this website and/or in related promotional print or video material of trademarked names and images is strictly for editorial and descriptive purposes.

I have tracked this order almost every day, I took screen shots of the order number I provided above and the ratings on this were very good 4 and a half stars, and now it's went down to 1and a half and showed information about the product and now it shows nothing, I even contacted 17 track… Read more➤

I bought a wireless IPCAM model APM-J011-WS a month ago from geeks. It worked fine as long as the ethernet cable attached but would not work wireless. Strange it has antenna on it and is advertised as wireless. I sent it back for a refund which I did get. I ordered and received the outdoor model APM-J901-Z-WS…. Read more➤

Geeks.com Store → devices do not work

A few days ago I bought two USB PC to PC cables. They are used to transfer data from one computer to another. On the internet I found geeks.com. Since most of computer related products do not work properly, I bought two different devices… hoping that one of them works. If this would have been the case,… Read more➤

Recently I purchased a refurbished cpu at a cheap price and it works fine as advertised. Then, I thought I should replace my 9 year old power supply and they had a really cheap one for $12.99 with $8.00 shipping. I should have known better! Everything about it is "cheap" and it doesn't boot my computer to… Read more➤

Ordered 2x a logitech universal remote. Both supposedly ‘refurbished’. Have bought refurbished products for years, I take it to mean a product sent back to company and refreshed back to new condition. Both remotes were nasty/dirty with food and sticky stuff and neither worked. Even if they were not nasty dirty, they didn’t work, so I had… Read more➤

Geeks.com Store → the product was not what was described on the site

Geeks.com listed merchandise on their website as having certain features and specs. I receive the item only to find the specs are not accurate the item is far less than what I bought. After 2 hrs on the phone they agreed to take the item back. I foot the bill for shipping both ways they take a… Read more➤

Home / Consumer Electronics
Share Report
Most Reviewed:
I was contacted regarding the status of my inquiry.
→ Sedgwick | 83 reviews
Paint is flaking off etc acura rsx 2005
→ Earl Scheib | 4 reviews
Your Advertising team really screwed up this one
→ Ritz Crackers | 152 reviews
Awful experience with an agent
→ Safeco Insurance | 47 reviews
Products are missing
→ Bedding Inn | 79 reviews
Bra issue left whip marks on my skin
→ Thirdlove | 66 reviews
To tell you to run if your even thinking about using this company.
→ Jeld Wen | 92 reviews
Un cooked noodles
→ Stouffers | 92 reviews
I would never buy another Gateway product nor would I ever recommend that anyone else do so ever
→ Gateway | 17 reviews
Scammers Dont Buy from them
→ Trendyiron | 55 reviews
Copyright © 2021 CLAIMBO.COM. All rights reserved.