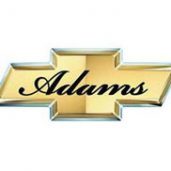 ↳ Incorrect address filed on log book
is not affiliated, associated, authorized, endorsed by, or in any way officially connected with Adams Chevrolet, or any of its subsidiaries or its affiliates. The use in this website and/or in related promotional print or video material of trademarked names and images is strictly for editorial and descriptive purposes.

I bought the truck and that’s all they wanted! I jumped through hoops to get this truck and paid extra money for a package to protect the exterior paint and glass as well as the interior. I have tried numerous times to get an appointment. Nobody gets back to me or even acknowledges that I bought the… Read more➤

Purchased a chrysler 300 3 months ago and the engine is already failing in the car. I've took it into their service dept because it was reading a car code of “p0300 engine misfire” and they wanted $105.00 just to check the car out even tho i had a warranty on the car. Anyway they check the… Read more➤

I would like to warn you about the shameless attitude and extremely low-quality GELISH manicure "Eklektika" in the salon of LLC "Venezia" at Dzelzavas Street 49, which I did with master Allyson some time ago. The result: two fingers were cut, all the cuticles were severely torn with blunt instruments, the varnish itself cracked in the evening and the nails became dark, with air bubbles (apparently, due to the quality of the fault-based varnish or technological errors). No apologies for the cut fingers! " It happens". Arriving later with a complaint in the salon, the owner-owner Ilona looked very worried about the accident, even received photos from me with "horror pictures" of the manicure, immediately promised to transfer money to the bank and announce her conversation with the manicure performer. Of course,they were just promises, no money back and no more news. It should be noted that in another cabin this Gelish coating with great difficulty (did not help any liquids - only scratching and sanding) 1.5 h. removed from time. It's hard to call this place a salon, but the people who work there are honest professionals.