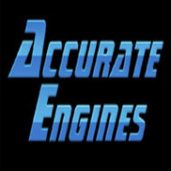 ↳ Quick to sell, not quick to help when things go wrong.
is not affiliated, associated, authorized, endorsed by, or in any way officially connected with Accurate Engines, or any of its subsidiaries or its affiliates. The use in this website and/or in related promotional print or video material of trademarked names and images is strictly for editorial and descriptive purposes.

Accurate Engines → I purchased a 5.4 L remanufactured eng on 5/25/21 and was told my eng was shipped 3 different times but it was never shipped as of today 7/7/21 and now they dont answer their phone when I call

i have not received my engine as of today. I tried to call but no answer. My next step is to file a report to the better business Bureau. Hope that will help. User’s recommendation: Do not deal with Accurate Engines they are a ripoff.

At first we were upset because Accurate Engines put a new engine in our truck and then on our way home we broke down! However I texted right away and they replied it in the evening after hours. Then, first thing in the morning I received another text and they told me that they would pick up… Read more➤

9000 miles on a new motor it came unglued in August under their 100,000 mile warranty. They have had the vehicle twice now since they rebuilt it burns blue smoke right out of the back of the motor. Don’t let this company touch your vehicle spend extra and take it to a OEM dealer. By the way… Read more➤

Accurate Engines → Quick to sell, not quick to help when things go wrong.

Bought an engine back in July, but there are/were compression issues with the engine. Accurate blames the mechanic, mechanic blames Accurate. During all of this I am hopeful that Accurate (like my mechanic) will at least treat me (the paying customer) with respect and keep me informed on what they find out during the process of getting… Read more➤

Accurate Engines → How do you stay in business?

Filed against : Accurate Engines 2840 Dormax St SW Grandville MI 49418-**** Complaint Description: Removed $500 from my checking account, without verifying within their business, if and when core was returned 60 days after core was already shipped. On 8/6/19 I noticed while viewing my bank statement that I had a pending transaction from accurate engines for… Read more➤

Accurate Engines → Junk 4.7l Dodge and will not honer warranty

Installed a reman 4.7l dodge from these *** Got 4800 miles out of it and it started knocking. Lanny is an idiot, just wants you to pull motor and send it back on my dime so he can claim it is my fault. I rebuild diesel engines and have never had one come back, so I know… Read more➤

We purchased a re-manufactured engine 01/22/2019 and sent core as directed – they received it on 02/08/2019. At that time, they did not state we needed to send by certain date to secure the one they had one hand. They confirmed receipt of core on 02/08/19 and tech stated it would be ready by end of week… Read more➤

I ordered an engine from them which they said they had , and paid them their asking price which they received and I had to cancel it because the didn’t send it to my mech. In a timely manner. They sent me a refund check with I deposited in my bank account and two days later my… Read more➤