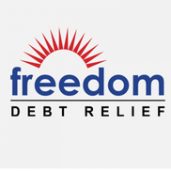 ↳ Prepaid MasterCard
is not affiliated, associated, authorized, endorsed by, or in any way officially connected with Freedom Debt Relief, or any of its subsidiaries or its affiliates. The use in this website and/or in related promotional print or video material of trademarked names and images is strictly for editorial and descriptive purposes.

I will say this, when things got really out of control due to a cancer diagnosis and the domino affect it had, it was a relief to have all the phone calls, letters etc, handled by FDR and sure sounded good at the time. I will say their customer service has always been wonderful. However I’m now… Read more➤

Freedom Debt Relief → I am having so much trouble with this so called debt relief company.

Freedom Debt Relief → HARASSMENT AND AN EXPLOITATION OF MY CREDIT

I SIGNED ON TO GET INFORMATION ON THEIR COMPANY, THINKING I CAN GET THE INFORMATION ONLINE. YOU HAVE TO SUPPLY SOME INFORMATION AND YOUR SOCIAL (MISTAKE!!!) I WAS THEN CONTINUALLY HARASSED WITH PHONE CALLS COMING IN EVERY FIVE MINUTES, THEN SEVERAL TIMES A DAY, EMAILS AND THEN SOME IDIOT NAMED JASON DECIDED TO LEAVE ALL MY DEBT… Read more➤

Some things came off my credit but the big ones did not. I ended up declaring bankruptcy chapter 13 because they kept raising my monthly fee. And it took them a long time to negotiate my debt and when they did some credit card companies already filed suit against me. I had to let there “attorneys” take… Read more➤

They collected funds from 2018 to 2020 monthly negotiated several loans and charged monthly fees throughout the program. Due to the consistency in monthly timely deposits, they offered an early payment consolidation loan through their company. However, once the remaining debts were negotiated (which were a tremendous savings) they charged me fees for early settlements and interest… Read more➤

Freedom is misleading, did not payoff my debt like they explained, I was sued three times, the raised the price on me due to being sued, . I ended up with a judgement and I lost my job so I negotiated some creditors myself and I told Freedom I couldn't pay for awhile because I did not… Read more➤

I listened to reps from FDR and listed 2 debts with them one for about $50k and another for $10k. I made it clear that I wanted the $10k debt resolved first then the $50k one. They started sending me settlement approval requests for the $50k debt via email/text/phone, I reiterated my preferences and they kept ignoring… Read more➤

Freedom Debt Relief → Their hidden fees, mislead you, take your money and ignore your request

Jointed Freedom Debt Relief 2017, made every single payment, am a single senior woman who prides herself on her credit. They took care of my debts, not sure which ones, the story changed everytime I asked someone when I called the company. I have some phone calls where they wanted to consolidate. I didn’t understand and didn’t… Read more➤

They are crooks dont listen to their promises. They will prioritize your debt as they see fit and dont care who is breathing down your neck. They will even refuse to make a courtesy call to let the debt collector know that you are working with them. They also have a class action law suit against them… Read more➤

Freedom Debt Relief → Customer service (no return of my money

I got ripped off from my debt, this program ripest you off . They say they can help, they don’t . They are very rude and not help people . I cancel this program cause nothing got paid off after a year with the program . I asked for my money back and they told me no… Read more➤

SIA, , Bekons Alianse, , Rigga, Ilekstes street 107 k-1 is a construction company, which chaired by board member Igor Volodkin. Igor Volodkin is a great storyteller when hiring employees, not concluding contracts, not paying taxes. The advantageous moment of dismissal without paying the salary simply misappropriated it yourself. From 2019 to August this year, a lot has been cast. If any of his actions have been affected, contact the State Labor Inspectorate and the State Revenue Service. Because at the moment they will have nowhere to say, there are all the original copies of the proven documents submitted to these instances. Expressing threats to former employees over the phone will do so by either a criminal or a brutal foreign.This company will be safe for you to crash.