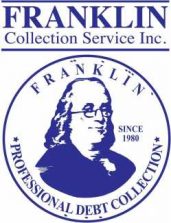 ↳ Trailer financing
is not affiliated, associated, authorized, endorsed by, or in any way officially connected with Franklin Collection Service, or any of its subsidiaries or its affiliates. The use in this website and/or in related promotional print or video material of trademarked names and images is strictly for editorial and descriptive purposes.

They claim I owe money to AT&;;;T. I DO NOT!!!! User’s recommendation: file a complaint on these mean people.

Franklin Collection Service → Received a “bill” for $35.00 from a supposed physicians services

EVIDENTLY A FRAUDULENT COMPANY! I Received a “bill” for $35.00 from a supposed physicians services, yet I was on hold nearly 10 minutes while they looked for the information about who I “owed” this money to. I finally hung up. I will be checking my credit reports now which will waste my time and trying to get… Read more➤

Franklin Collection Service → They are reporting accounts that are not valid.

A negative report is showing up on my credit report that are not mine or invalid.

Never dealt with them yet they are on my credit report!!! I have contacted them several times they can not validate or provide a contract bearing my signature and still have not taken the fraud account off my credit report.

After our review of the issue, I wrote both the customer service manager and Dan Franklin about the issue with back up copies of the dispute. We also disputed all of the issues with the credit bureaus. They have all been removed. Thank God!

After cancellation of AT&T Uverse we returned the Modem. AT&T Closed the account 60 Days later and never notified us that they never checked the Modem back in. 6 Month later we get a collection notice from Franklin Collection. Never knowing how this works we called AT&T and they took payment. We thought the matter closed. 2… Read more➤

Over several years they have placed me in collections for debts they can’t explain. No documentation of services rendered or nothing. Each occurrence the bill is higher than the last. So I get a call for a debt and I had not used the service that they were trying to collect for. These people are hoods and… Read more➤

I happened to look at my credit acore and what do i see? Franklin collection agency. Before i left lifecore i asked my therapist tracy who used to come by my apartment in parkway terrace 108 did i owe anything the following month which was in November before i left had checked for me she said no… Read more➤

Franklin Collection Service → They are illegal

i settled a claim in january with a different collection agency and 5 months later franklin services calls me to collect the rest of the money after i settled the acct.