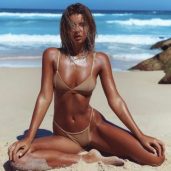 ↳ No response to my request to return delivered item
Shein

↳ I need a return address for refund Your 844 numberdoesnot
Roamans

↳ To see if my item has been received
Shein

↳ I want to change the shipping address on my package
Shein

↳ Wrong sizes will not send return stickers
is not affiliated, associated, authorized, endorsed by, or in any way officially connected with Frankie Swimwear, or any of its subsidiaries or its affiliates. The use in this website and/or in related promotional print or video material of trademarked names and images is strictly for editorial and descriptive purposes.

I spent 200$ on a swim suit then I wore it one tone and the color faded and is snagged. Customer support is ZERO. I have 15$ target bathing suits better than this. EXTREMELY DISAPPOINTED

I bough an $100 bikini size 8. I’m thin and short and it wears like a 6 super small. I’ve tried to contact them to get a bigger size, But they didnt care at ll. It was my 1s purchase and I have no idea they were to small. Dont know whats the big problem on freakin… Read more➤

Be aware!!!! The company changed their website address to www.frankiiswim.com

FIrstly they told me two weeks after I bought this item that they didn’t have my briefs size. Then I get another email around two weeks later asking me to clarify the post address. Now they are ignoring my emails. Terrible and so disappointed. I wanted to use these for my holiday coming up in the next… Read more➤

Purchased the Cuba tie top which was faulty as the two sides of the bikini were sewn differently, meaning one provided lots of coverage and one almost none. Returned and was issued a store credit. Had to purchase something else to avoid wasting the store credit and purchased the darling bralette. The clasp did not go all… Read more➤

16 days later( not including weekends) & I am still waiting for my $100 refund. I find that to be beyond ridiculous & extremely frustrating which makes me wonder if I should even purchase from them again!

I purchased some bikinis for $130…. I wore them in the pool like all swim wear should be able to especially when they are the price they are! Emailed them to see if I could get a refund or an exchange as they were discoloured and have white dots over them… they replied back with you should’ve… Read more➤

Frankie Swimwear → Horrible, stole my money and gave no product

I ordered a bikini for just over $130, it was ‘in stock’ online. They then messaged me and advised they did not actually have it available due to an ‘inventory error’. I asked that they refund the order as there was nothing else I wanted. They refused a refund and have not made ANY ATTEMPT to resolve… Read more➤