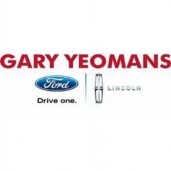 ↳ Was unable to talk to anyone
Hyundai Motor America

↳ Car under warranty not getting fixed for more than 1.5 months
Hyundai Motor America

↳ Out of pocket
is not affiliated, associated, authorized, endorsed by, or in any way officially connected with Gary Yeomans Ford, or any of its subsidiaries or its affiliates. The use in this website and/or in related promotional print or video material of trademarked names and images is strictly for editorial and descriptive purposes.

Original review updated by user Jul 06, 2021 I added pictures. I paid $8966. For this. And issues with front end . Which I had to take to Chevy to get fixed. They did pay for some repairs. But you pay for fair value that should include that it runs the way its suppose to. You sell… Read more➤

Gary Yeomans Ford → They tried to rip me off

Update by user Jul 30, 2021 The sales manager called me to apologize, and offered to ” take care of me ” if i ever brought the car to their service dept. So they would not loose my business as well. I thought about it and agreed. Then some idiot decided to start an argument with me… Read more➤

My salesman, Mike Long, provided excellent service for me in my purchase of a new Mustang convertible. He was able to locate the exact car I was looking with all the features I wanted. He also went out of his way to find the maximum amount of discount benefits for me, which lowered my cost significantly. Additionally,… Read more➤

Just wanted to say thank to Congo and Pat for always being there for me. My family only does business with Congo he is the main reason that we purchase and do service at Gary Yeomans Ford

Gary Yeomans Ford → Pricing not as listed, “lost” key to my trade-in

I’ve shortened this a bit, for the sake of relative brevity… the pricing on the cars.com ad for the vehicle was listed as $22,497. There was no stipulation in the ad that this included a discount for financing, and/or trading in a vehicle with them, though some dealerships operate that way. (I have screenshots of the entire… Read more➤

Disappointed – 3rd car in less that 1 year – spent almost 8 hours there on a Saturday, with the exception of picking my spouse up at the ER – Then proceeded to wait while the finance person was on his cell phone – Came back the next day to finance with the person that I had… Read more➤

TODAY file a complaint on their abuse of financial exploitation of a senior citizen. I was told by Jason and Gary Boyler the car had a rattle in the frame and they could not repair it and the car will be sent back to Lincoln. When I called the Lincoln Corp. at…

Sold my 93 year old uncle, who was in a wheel chair a new hail damaged Mustang GT. He couldn’t drive and was taken advantage of. He has since passed away and they offered to buy the car back for 32k, he paid 44k and it has 307 miles on it. These guys are crooks!

Mr. Allan,/ Paul Thiel General Manager Gary Yeomans Ford/Lincoln This is to inform you that I have notified the Attorney General in the State of Florida to request to go to arbitration by the Florida New Motor Vehicle Board on my Lincoln MKC, 2016 vin# {{REDACTED}}. I…

Dealers
Share Report
12 .
Most Reviewed:
Improper vehicle removal
→ Caroline's Towing | 1 review
Extra charge on a glass food prep
→ Bloomin Brands | 8 reviews
Ridiculous staff behavior
→ Shopko Optical | 20 reviews
Place a order for 2 pairs of shoes and have not received any of them. No one will contact me and I don’t have any confirmation number or tracking number to go by
→ ShoesPie | 34 reviews
Wired funds not showing up in my account.
→ Coinbase | 109 reviews
Unethical company at best – AVOID THEM IF POSSIBLE
→ Cvs Caremark | 91 reviews
Prepaid payments
→ Georgia Power | 25 reviews
ABSOLUTELY ROTTEN RECENT CUSTOMER CONTACT
→ Via Benefits | 29 reviews
Lazy and Scammers
→ Batteries Plus | 79 reviews
I need to exchange my entire order for the next larger size
→ Roselinlin | 70 reviews
Copyright © 2021 CLAIMBO.COM. All rights reserved.