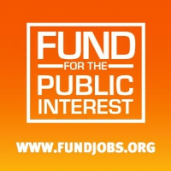 ↳ I have some query regarding bike purchage
6ya

↳ Was charged for no service
Bike24

↳ Not come bike
6ya

↳ Refund not given when never used the dervice and never had an account
is not affiliated, associated, authorized, endorsed by, or in any way officially connected with Fund For The Public Interest, or any of its subsidiaries or its affiliates. The use in this website and/or in related promotional print or video material of trademarked names and images is strictly for editorial and descriptive purposes.

Fund For The Public Interest → Review in Staff category from Brooklyn, New York

I’ve been dealing with their fund raising people for several years. Usually they stand in teams of two or more at New York City locations soliciting donations. They can be pushy. The most recent encounter I had was kind of negative. When it came out in conversation that I’m unemployed at the moment, the young man proceeded… Read more➤

My experience with the Fund has been with the fundraisers they have stationed in pairs or more throughout NYC. They can be very aggressive. In conversation with a young man I encountered just yesterday I revealed that I am currently unemployed but he proceeded to try to get money from me anyway. A big part of the… Read more➤

Fund For The Public Interest → Misleading and Manipulative

I recently quit from this organization after my third day. I was hired for a position that didn’t really exist. They recruited at my school and were extremely misleading about what I would be doing. Everything about these organizations is calculated, manipulative, and scripted. On my first day I was told to make calls to people who… Read more➤

This company is cutthroat and brutal. They use you like toilet paper and the bare second you miss quota, they dump you like used toilet paper. Don’t waste your time working for these ‘people’. They expect you to pressure poor people to give money they don’t have and if you don’t do it, they fire you! I… Read more➤

Fund for the Public Interest, Public Interest Research Group, Grassroots Campaign Initiative, they go by several names and often times advertise on websites like craigslist under the non-profit jobs section. By and large, they promise unemployed and young college students “jobs for good causes” but what they do not tell people is the 70-80 work weeks, high… Read more➤