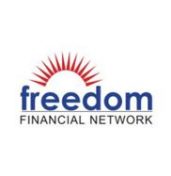 ↳ Product is offered with a 30 day money back guarantee. The free trial wasn’t fr...
USAA

↳ Fake selling of plots
is not affiliated, associated, authorized, endorsed by, or in any way officially connected with Freedom Financial Network / Freedom Debt Relief, or any of its subsidiaries or its affiliates. The use in this website and/or in related promotional print or video material of trademarked names and images is strictly for editorial and descriptive purposes.

FDR was authorized to settle debts with my approval. One of my creditors was paid off minus one payment in 2016. They sent another proposed settlement offer which I instructed FDR to deny. Against my verbal instruction and in spite of no written permission FDR paid off the creditor for the 2nd time by paying them the… Read more➤

Received biased and threatening emails from this company the Freedom Financial Network and ended up dealing with their legal counsel Dharma Naik. Don’t know if it’s a legitimate company or not but they are asking me something that is totally irrelevant and they keep on spamming my inbox. Is anybody else receiving this type of spam? dharmanaik… Read more➤

Freedom Financial Network / Freedom Debt Relief → didn’t do what they were suppose to do.

This company had different answers all the time, we have paid $3, 808.00 into it for basically nothing, still waiting for creditors to turn us into the collectors and ruin our credit. Which that isn’t we wanted. The creditors called contiuous and said they would settle, which I thought they were going to figure and amount and… Read more➤

They told us that we qulified for a 1200 $ personal loan and that we needed to send 970$ to secure the loan and that I needed to send it western union to charline cambell in kingston jamaica after taling to dale and emily they asured me that it wasnt a scam, after two weeks they stoped… Read more➤

I was contacted by freedom financial and was told they had a great program to re-establish credit. They told me that they would report to the credit bureau every 30 days which is much more then normal. I was told it would be a visa/mastercard which I could use anywhere. The only thing that I had to… Read more➤

I have been enrolled in the Freedom Debt Relief since 2015. I enrolled with three debts. After almost three years and thousands in fees one debt has been resolved, one is in progress but the third has filed a lawsuit do to Freedom Debt relief's failure to respond to their request for communication. I received a letter… Read more➤