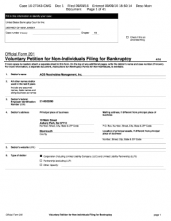 ↳ NOT BBB ACCREDITED
is not affiliated, associated, authorized, endorsed by, or in any way officially connected with ACB Receivables Management, or any of its subsidiaries or its affiliates. The use in this website and/or in related promotional print or video material of trademarked names and images is strictly for editorial and descriptive purposes.

My company hired ACB a few years ago. At first they were very cooperative. We had a rep assigned to our case who would fax me daily reports on a monthly basis as well as send payments when they were able to collect on delinquent accounts. Within a year I began to notice that their communication with… Read more➤

ONCE AGAIN, THESE IDIOTS WHO HANDLE DR SCOTT COHEN & RASO GASTROENTEROLOGISTS ACCOUNTS (EVEN AFTER PAID IN FULL) HAVE THIS REPORTING ON CREDIT REPORT. ITS ONLY $148 BUT IT WAS PAID IN FULL &; THEY WILL CONTINUE TO SHOW IT AS A PAID COLLECTION FOR YEARS TO COME. SHAME ON YOU FOR LYING, SAYING IF IT WAS… Read more➤

i WENT TO DR. SCOTT COHEN AND DUE TO HIS MISDIAGNOSIS, I NEVER PAID $148 LEFT OWING AFTER HE MILKED MY HEALTH INSURANCE FOR EXPENSIVE PROCEDURES WITH HIS AFFILIATED SURGERY CENTER AND ANOTHER GASTRO FOUND PROBLEM. I DECIDED TO JUST PAY WHEN THESE SAID THEY WOULD REMOVE FROM CREDIT REPORT. THEY LIED!! STILL THERE EVEN THOUGH IT… Read more➤

Make sure you record these employees & then you won’t be told one thing & another done. Companies that are not BBB accredited usually are not for a reason. Check them out on all the complaints that they ignored & did not respond. There aren’t many here. Also, check out PISSED CONSUMER & see how some people… Read more➤

ACB Receivables has been chasing me for a bill that is not mine for several years. I am a female and the person is a male . So they know they are wrong. They placed it on my credit file and will not remove it even though is have repeatedly sent letters. This has been ruining my… Read more➤